The city of Greenfield is full of a wide variety of outdoor public art and murals for our residents to enjoy. A number of local organizations have felt that the arts are an important feature of our community, and so have partnered to incorporate murals, statues and more into the structure of downtown Greenfield. As the weather gets warmer, use this guide to take a walk and enjoy some of the most popular outdoor public art and murals in our area.

One such large-scale public art piece in Greenfield is “A Barefoot Boy,” a mural located on the west side of downtown at U.S. 40, across from the Living Alley and Lincoln Square Pancake House. This mural is a whimsical depiction of the James Whitcomb Riley poem of the same name. “A Barefoot Boy” was painted by Andrew Hern of California in 2018, after a collective of local organizations put out a nationwide Call for Artists. 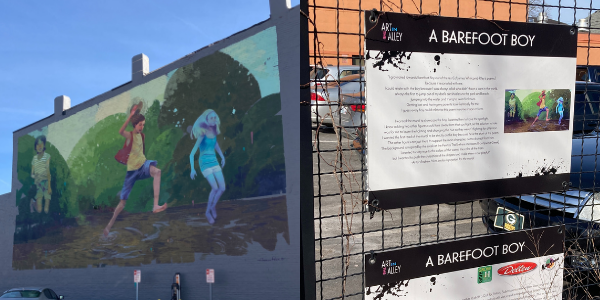 On the east side of town, located at the southeast corner of Main Street and American Legion Place is the “Tall Tales” mural, completed in 2021. This agriculture-focused mural depicts an older farmer telling an exciting story to another younger man and a young girl. Painted by artist Pam Bliss, an Indiana native, the mural is meant to “capture the farming roots that run deep in Hancock County.” The piece was commissioned by the Downtown Greenfield Mural Committee, with a grant from the local White Family Foundation.

The people shown in the mural are actually likenesses of three Hancock County residents named Tom Graham, Jay Shininger and Katie Brown. They were selected by local theater director Chris Schaefer, who was Graham’s neighbor and had ties to Shininger and Brown from the theater community. The group was chosen to represent the past, present and future of agriculture, and notably includes a female because “women are an important part of the farming community too,” said Bliss. 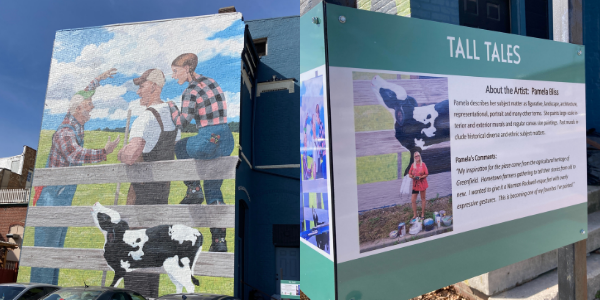 Greeting visitors and residents coming into downtown from the north is the James Whitcomb Riley mural, also completed by Pam Bliss. This public art piece was painted on the former Dance East Ballet studio, currently occupied by Passtime Fabrics and opposite the Hancock County Memorial Building. The location and subject were chosen to anchor the Riley Literary Trail, the premier project for downtown revitalization as a part of the Stellar Communities designation and grant funding from the state of Indiana.

This public art features a large portrait of Riley, along with verses from his “Wet Weather Talk” poem. Upon the mural’s unveiling, Joanie Fitzwater, City Planner for Greenfield, explained “Our goal was to create really beautiful murals on all four sides of downtown that served as gates to the historic district.” The final downtown mural on the south side of Greenfield is planned to face the Hancock County prosecutor’s office on American Legion Place, with plans for it to look like a bookshelf filled with books. 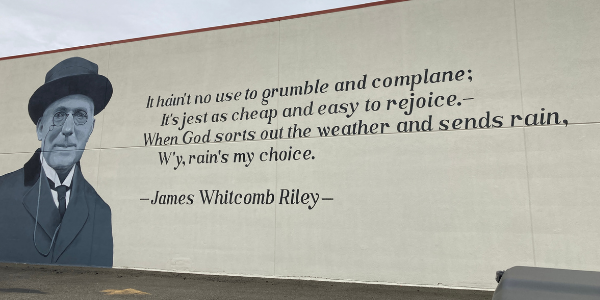 The Living Alley, located along the parking area between U.S. 40 and North Street (near the Barefoot Boy mural) is a beautiful event space used regularly for festivals and outdoor community celebrations. It also features metal instruments for visitors to interact with, which were designed and installed by local artists. 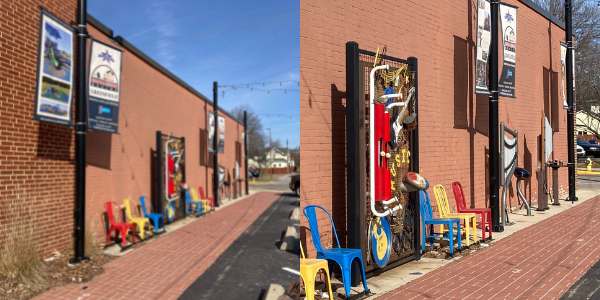 As you pass Greenfield City Hall on foot or in your car, you may have noticed the large painted bison and wondered where he came from. In 2016, Indiana celebrated its “bison-tennial” by installing fiberglass bison public art in all 92 counties across the state. Our bison is named “Whitcomb” after a certain famous citizen and features images of a bison herd alongside a mastodon, grain silos, the Covance building, Tuttle Orchards and more. Whitcomb was sponsored by the Hancock County Tourism Commission and Mueller Auto Body and Glass Shop and handpainted by local artist Deborah Smith and friends. 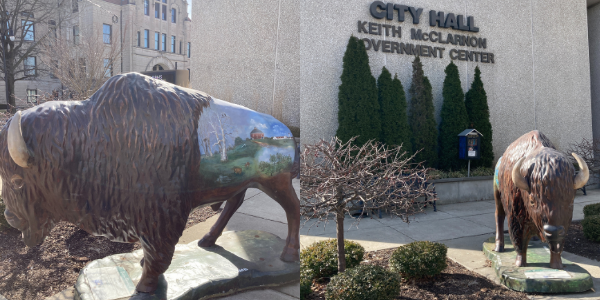 Another statewide public art installation called The Walking Man Project brought the Clark Ketchum statue to Greenfield, located at the American Legion Place entrance to the Pennsy Trail. The Walking Man Project started in 2012 in Anderson, with 10-foot tall steel statues created by Levi Rinker and placed around Madison County to represent local organizations and proceeds supporting nonprofits. The project eventually extended to other locations around Indiana, and our local Walking Man was installed in 2013. It is painted in the likeness of Clark Ketchum in recognition of his outstanding service as Parks & Recreation Superintendent from 1985 to 2005, commemorating his love of parks, the arts and golf. 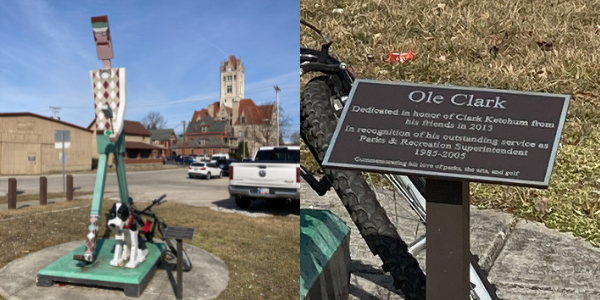 Do you love public art and murals? Tell us about your favorite piece!